Schaal starred in the cult hit “Flight of The Conchords,” and is the Women’s Issues Correspondent for “The Daily Show with Jon Stewart.” She voices the character Louise in the Fox animated series “Bob’s Burgers,” and has a recurring role on “30 Rock.” Other film and television credits include Toy Story 3, Dinner for Schmucks, “Mad Men”, “Modern Family”, “Gravity Falls,” and “The Simpsons,” among others. In 2011, Kristen appeared in The Coward at The Lincoln Center Theatre, and was awarded The Lucille Lortel Award for her performance.

As a stand-up, Schaal won the award for Best Alternative Comic at the 2006 United States Comedy Arts Festival in Aspen and is the recipient of the second annual Andy Kaufman Award hosted by the New York Comedy Festival. Additionally, Kristen was a Pierre Award Nominee at the Edinburgh Fringe Festival, and in October of 2005, she was included in New York Magazine’s “Ten Funniest New Yorkers You’ve Never Heard Of.” She has recorded two specials, “Comedy Central Presents: Kristen Schaal,” and “Kristen Schaal: Live at the Fillmore.”

Schaal is also a published author. She co-authored a sex guide, The Sexy Book of Sexy Sex, with fiancé and “Daily Show” writer Rich Blomquist. 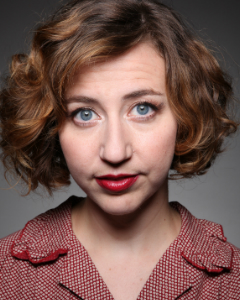