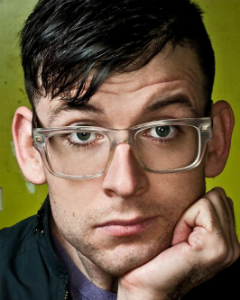 “Displays a fiery frustration and agile, confident showcase of his neuroses” – SF Examiner;

“ quick talking, very smart and a deft observer of all that is wrong, profoundly wrong, with today’s society. Strap yourself in” – Irish Times

“(With) a powerful comedic voice and amazingly wide range…(He is) one of the most important comics to watch out for”- Punchline Magazine
“Hunk” – East bay Express.