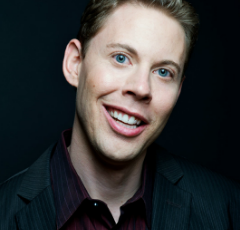 Ryan’s future is bright. Named one of Rolling Stone’s five comics to watch and with standout appearances on NBC’s Last Comic Standing, Comedy Central’s Live at Gotham, and the Showtime special Caroline Rhea and Friends, he’s on his way to establishing himself as one of the nation’s favorite stand-ups.

Ryan started life in a small, beautiful potato farming community in Idaho. While spending his youth doing things like sleeping in a tree house, riding his bike to the drug store for milkshakes, and living out other Norman Rockwell paintings, he often dreamt of becoming a late night talk show host (or a secret agent, or Ferris Bueller, or Spider Man, or a combination, if at all possible).

He received his degree in journalism and public relations at Brigham Young University. Before graduating he took an internship in a small New Hampshire town and spent the weekends exploring Boston. On one trip, Ryan caught a stand-up show headlining the late Mitch Hedberg that had a profound effect and was the final push he needed to give stand up a go.

Three years later, almost to the day, Ryan performed in that same Boston club as a semi-finalist in Comedy Central’s Laugh Riots, one of a handful of fledgling comedians selected in a nationwide search.

In his first year, he spent his nights performing in the local Salt Lake City, UT clubs and his days working in PR. He eventually decided to pursue comedy full-time and has been making a name for himself as a stand-up ever since.

Early on, Ryan spent a year in Seattle, WA honing his act nightly, sleeping in his car all too often, and cutting his teeth in the notoriously difficult Northwest one-nighter bar show runs. His first break came when he won the industry night at the Seattle International Comedy Competition. He considers both Salt Lake City and Seattle comedy homes.

Previously, he won Sierra Mist’s “America’s Next Great Comic Search”, was a two-time finalist at the Boston Comedy Festival competition, and appeared at HBO’s Las Vegas Comedy Festival as an up-and-coming talent. He’s also a regular guest on the nationally syndicated Bob and Tom radio show.

With immediate comic charisma and a crisp, clean writing style, Ryan is sought after for his ability to perform for a wide variety of audiences while making each show a unique, memorable experience.

His extensive touring schedule often finds him far from his Idaho roots and he currently makes his home in New York City. The comedic contrast always finds a way into his act. Phil Hanley began stand-up comedy by performing at open mics around Vancouver, often in between bands at music venues. Since settling in the United States, Phil has become a regular at NYC’s renowned Comedy Cellar. He has also appeared on The Pete Holmes Show, John Oliver’s New York Stand-up Show, and The Late Late Show With Craig Ferguson twice. In the past year, Phil has appeared on Late Night With Seth Meyers, @midnight and been on the road with Aziz Ansari. Phil’s Comedy Central stand up special “The Half Hour” also aired in 2016. Phil is the lead actor in the upcoming film Sundowners (2017) alongside Tim Heidecker. Phil has a role in the latest Amy Schumer movie. 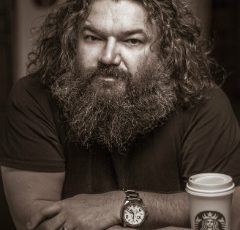 The new millennium not only saw out the age of the Mullet hairstyle, but also welcomed Toby Hargrave into the world of stand up comedy. Since, he has gone on to perform at such notable festivals as the Vancouver Comedy Festival, Whistler Comedy Festival, Atomic Comedy Festival in Washington State and The Just for Laughs Festival in Montreal. He was voted the ‘Funniest Comedian in Vancouver’ at the 2005 Vancouver Comedy Festival, and has appeared at such notable comedy clubs across North America as Yuk Yuks, The Laugh Shop, the Comedy Mix, The Improv, The Ice House, Hermosa Comedy Magic Club, The Comedy Store, Jon Lovitz Comedy Club and The Laugh Factory and the Comedy Underground!

His television credits are numerous including the Corner Gas National television special, “Comic Genius”. He has guest starred in such notable productions as “Aliens in America” on the CW Channel, the feature film “Fireball” (directed by Kristoffer Tabori) and “CMT 2010” on CMT. He can currently be seen in “Altered Carbon” on Netflix, “Intruders” on BBC Worldwide and “Overboard” in theatres now. This is without even mentioning his one-hour comedy special airing on CTV and the Comedy Network.

Toby’s first steps into the world of comedy were in improv and sketch in 1992. As a member of the award winning company Rapid Fire Theatre for over 15 years, His journey into sketch comedy also began about the same time as his inaugural show at the Citadel Theatre in Edmonton with a local group of artists, mentored by the well-known Three Dead Trolls in a Baggie. Toby’s talents as a musician saw him as a featured guest on local Edmonton radio station, Power 92.5FM performing with the Morning Crew as well as co-writing and performing songs. Since then, Toby has been a guest on CJSR, Mix 96 and K-Rock 97.3 in Edmonton. More locally on The Fox, and Shore FM in Vancouver and many more television and radio stations across Canada. Today you will find Toby tickling the funny bone on his own. Whether you’re seeing him in a club, a theatre, or perhaps a tailored show for your company, you’re in for a great evening of food, libations, and stories. (Please note that Toby does not provide food or libations). While many comedians rely on shock humour, gags, props, and cursing – although he does admit to cursing, from time to time – Toby relies on the truth: “…an exaggeration is still technically the truth.” He’s convinced that the truth is the funniest thing of all. A skilled storyteller, Toby has a wonderful gift for making the audience feel right at home (but not too comfortable). His comedy has universal appeal, leaving audience members nodding in agreement, feeling “me too!” or in stark horror saying “may God have mercy on his heathen soul”.

In a world of overly abrasive comedians, Toby is charming and humble. One might even say he is chumble… one might